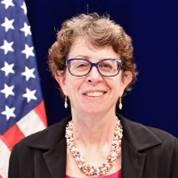 U.S. Department of State Senior Advisor to the Smithsonian Institution in the Office of International Relations

Carolyn Glassman is the U.S. Department of State Senior Advisor to the Smithsonian Institution in the Office of International Relations. Prior to her current assignment, she served as the Minister-Counselor for Public Affairs at U.S. Embassy Tokyo and co-chair of the Japan-U.S. Educational Commission (JUSEC), the binational commission that administers the Fulbright program.

Ms. Glassman joined the Foreign Service in 1995 as a Public Diplomacy Officer and has served two tours in Japan as well as in assignments to Korea, Hungary, and the Philippines. During her years in Washington DC, she worked as Senior Advisor in the Center for Strategic Counterterrorism Communications and as Office Director in Bureau of International Information Programs East Asia Pacific Office. In earlier years, she was a State Department Rusk Fellow at Georgetown University’s Institute for the Study of Diplomacy and taught in the Asian Studies program.

Ms. Glassman completed two years of PhD study in Communications Research at the University of Illinois at Urbana-Champaign and holds an MA in Film from Northwestern University and a BS in International Relations from Georgetown University.  Prior to joining the Foreign Service, she was a documentary filmmaker and marketing director in her hometown of Chicago, Illinois.  She speaks Japanese, Korean, Hungarian and French.