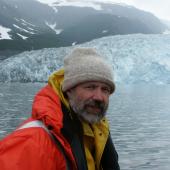 Aron Crowell is an Arctic anthropologist and the Alaska Director of the Smithsonian Institution's Arctic Studies Center. Founded in 1988, the Arctic Studies Center is the only permanent U.S. government program and the only Smithsonian unit devoted to northern cultural research, indigenous heritage, and educational outreach. Its partners include scientists and scholars, indigenous communities and organizations, universities, and government agencies in all Arctic countries. In 1994, the Arctic Studies Center opened an Alaska regional office at the Anchorage Museum to make Smithsonian collections, resources, and programs more accessible to the state’s diverse indigenous communities, scholars, artists, educators, students, and the general public. In 2010, the ASC opened Living Our Cultures, Sharing Our Heritage: The First Peoples of Alaska, a permanent exhibition of indigenous masterworks of art and design from Smithsonian collections, produced in collaboration with Alaska Native scholars, artists, and educators. The exhibition and its collection are the basis for ongoing collaborative heritage programs including artists’ residencies, community scholar visits, lectures, and language seminars.

Aron’s areas of expertise include cultural anthropology, archaeology, and oral history, and his influence has been essential in establishing productive collaborations with indigenous communities. Aron is inspired by more than 140 years of Smithsonian exploration and engagement in Alaska. He notes that, “everywhere I work there have been Smithsonian predecessors, including William Nelson, Frederica de Laguna, and Henry Collins. Since the earliest days of the National Museum we’ve been here. Remaking the connection between Smithsonian research and the people of Alaska has been one of the joys of this job.”

Aron holds a doctorate in anthropology from the University of California, Berkeley, and is an affiliate faculty member of the University of Alaska. He directs archaeological research around the Gulf of Alaska from the Katmai coast to Glacier Bay, and currently leads National Science Foundation-funded research on the human and environmental history of Yakutat Bay. Aron first got interested in the Arctic while working with Bill Fitzhugh on archaeology in Labrador in the early 1970s. For fun, Aron enjoys hiking, cross-country skiing, and paddling trips around Alaska’s lakes in a canoe that he built himself; he says it’s the best way to get out and see the beautiful country.

The Smithsonian’s Arctic Crashes project is an international collaborative study exploring the history of polar animal fluctuations and the shifting scientific, cultural, and public interpretations of human-animal interactions in the Arctic.