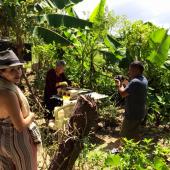 Christina Gonzalez is a PhD student in Sociocultural Anthropology at the University of Texas at Austin, with concentrations in Native American & Indigenous Studies and Museum Studies. Ms. Gonzalez’ doctoral research investigates contemporary Antillean indigeneity, particularly among Puerto Ricans in the diaspora exploring and articulating themselves as indigenous Taino.

Ms. Gonzalez holds a Bachelor of Arts in Political Science and Latin American/Latino Studies from Fordham University, and a Master of Arts in Maori Studies from Victoria University of Wellington in Aoteaora/New Zealand where she studied as a Fulbright scholar.

Since 2014, Ms. Gonzalez has worked with the Smithsonian's Caribbean Indigenous Legacies Project (CILP) as a Latino Museum Studies Program fellow, National Science Foundation fellow, and contract investigator, which has included research trips to New York City and Puerto Rico, archival research and website development. In addition, Ms. Gonzalez is exploring the representational practices of the Smithsonian in re-examining, re-interpreting and re-presenting the Caribbean’s past and how this may impact social consciousness and identity formation among museum goers and the public.

The Caribbean Indigenous Legacies Project retells the story of the Columbus encounter and celebrates the survival and vibrancy of Native Taíno culture and people today.