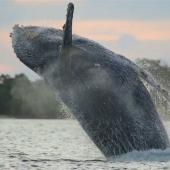 Tens of thousands of commercial ships cross the Gulf of Panama to reach the Panama Canal and its Pacific ports. Disastrous, sometimes fatal collisions with ships often result from the combination of this maritime traffic with high concentrations of breeding humpback whales in the area. Smithsonian Tropical Research Institute marine biologist Hector M. Guzman used satellite tracking data to compare the movement of humpback whales in Panama’s Las Perlas Archipelago with the courses of hundreds of container and tanker ships over the course of six seasons. Working over three years with the Panama Maritime Authority, the Panama Canal Authority, and the Panama Chamber of Shipping, Hector helped local partners steer the policy into law. Approved by the Republic of Panama and adopted by the International Maritime Organization, the Panamanian shipping lanes were implemented in December 2014. The first such lanes to use satellite tracking data in their planning, they are expected to drastically improve protection for humpback whales and other species in the area.

A staff scientist at the Smithsonian Tropical Research Institute since 1994, his studies of Central American marine species and habitats help equip policymakers and partners with solid science for developing stronger conservation approaches in sensitive natural areas.