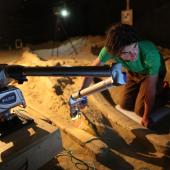 The Smithsonian embraces digital technology to make its collections more accessible to the world. Through the work of a talented Digitization Program Office team led by Günter Waibel, Vincent Rossi and Adam Metallo, people the world over can see iconic Smithsonian artifacts online at 3d.si.edu, and can also rotate them to view their every angle or print them out in 3-d and hold them in their hands. Online visitors will find objects in the Smithsonian X 3D Collection that have been laser-scanned with painstaking care to yield perfect detail; they can get a close-up view of the Wright Flyer engine or the pistil and stamens of a fragile orchid.

Before joining the 3D team at Smithsonian, Adam Metallo worked at the Smithsonian Office of Exhibits Central, where he developed workflows that integrate 3D technologies with traditional museum model making. In 2010 he began spending most of his time quietly sneaking up on inanimate objects to digitize them in 3D for the Smithsonian Digitization Program Office. Adam Metallo received his BS in Psychology from the University of Maryland in 2004 and MFA in painting from the University of Delaware in 2006.

In 2011, Smithsonian paleontologists heard rumors of a large number of marine fossils while working in the Atacama Region of Chile. This site, Cerro Ballena, or  “whale hill” in Spanish, contained the skeletons of more than 40 whales and other marine mammals.