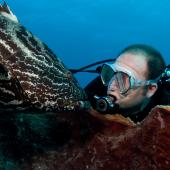 Steve Box is a marine biologist studying the effects of fishing practices that endanger more than half of our ocean’s biodiversity.

Steve was the first scientist to study the extent and scale of different fishing activities in Honduras in the Western Caribbean and their importance to the economy and food security of rural areas. This effort evolved from his doctoral research in Honduras, where he studied the coral reefs around the Bay Islands. Later he began working with indigenous Miskito fishers to build sustainable commercial fisheries that provided local livelihoods while preserving biodiversity.

Working with local communities and governments, Steve uses his research to help create networks of marine protected areas with measurable biodiversity conservation impact. To inform the design and placement of marine protected areas Steve uses molecular and genetic approaches, spatial dynamics and modeling, and fisheries economics and remote sensing. Steve’s research and investment in local communities is building fisheries that protect the environment and the livelihoods for fishers in the Western Caribbean and around the world.