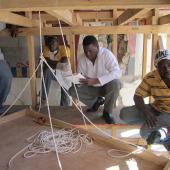 Power to Convene
Culture & the Arts

Olsen Jean Julien is an engineer-architect who has worked to preserve and promote the rich cultural heritage of Haiti for more than a decade. He served as Haiti’s Minister of Culture and Communications from 2008–2009, is a professor at the State University of Haiti and at Quisqueya University, and also one of the principals of Phenixience, an architecture and engineering firm. Olsen has a B.A. in Architectural Enginnering from the State University of Haiti, a Master's degree in Conservation of Monuments and Cultural Property from the Universidad Nacional Pedro Henríquez Ureña in the Dominican Republic and a post-graduate certificate in Conservation of Historic Buildings and Archaeological Sites from Columbia University in the U.S.

Olsen worked with the Smithsonian’s Richard Kurin and others as Program Coordinator of the 2004 Smithsonian Folklife Festival program, Haiti: Creativity and Freedom from the Mountains to the Sea.

Six years later, after the 2010 earthquake badly damaged and destroyed invaluable heritage sites around Haiti, Olsen again teamed up with Smithsonian for the Haiti Cultural Recovery Project. He worked with the Haitian and U.S. governments, international organizations and Smithsonian to secure the agreements that would lay the groundwork for the project. As Manager of the Haiti Cultural Recovery Project, Olsen worked with Smithsonian to build a community of trust and cooperation that was key to Haiti’s recovery from the earthquake and economic and social development. United in the effort to preserve Haiti’s cultural heritage, and despite the challenge of hurricanes, a cholera outbreak and presidential elections, the project treated more than 30,000 cultural items and has trained more than 100 Haitians in conservation to date.

In 2011, Olsen received the Gold Medal for Exemplary Service from former Smithsonian Secretary Wayne Clough for his role in the Haiti Cultural Recovery Project. This rarely given honor recognizes extraordinary achievement in service of the best ideals of the Smithsonian Institution. UNESCO also awarded Olsen the Medal of the Five Continents for his work. Olsen is now completing a Ph.D. program in Urban and Environmental Planning at the University of Montreal.

After the devastating 2010 earthquake in Haiti, Smithsonian worked with a wide array of dedicated, caring professionals from around the world to support the recovery of damaged and at risk Haitian cultural heritage.