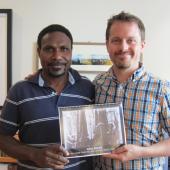 Joshua A. Bell is Curator of Globalization at the National Museum of Natural History. Examining shifting local and global networks between people, artifacts, and the environment, Joshua conducts ethnography in Papua New Guinea and on the culture of cellular phones in the United States. This work is complemented with on-going archival and museum-based research in Australia, Europe, and the United States.

Since 2000, Joshua has worked with community members in the Purari Delta, an ecologically diverse tidal estuary on Papua New Guinea’s south coast. He studies how deforestation and extractive industries have transformed the social, economic and environmental character of this area, and the role of objects in these global entanglements.

Working with local communities, Joshua documents their heritage and knowledge traditions. He has worked with Purari partners to publish a book of historical photographs in their language for the community’s use in schools and daily life. He has also worked with community members to create illustrated posters of local plants and basketry traditions to help support the transfer of ethnobotanical knowledge from generation to generation. He is currently working to create a CD of their musical traditions, which encode different aspects of their environmental and cultural knowledge.

Joshua earned his BA from Brown University (1996), an MPhil (1998) and DPhil (2006) in Anthropology from Oxford University. Before joining the Smithsonian, he was an assistant professor at the Sainsbury Research Unit for the Arts of Africa, Oceania, and the Americas at the University of East Anglia.

Through archival materials in our collections—sound recordings, field notes, books, and artifacts—Smithsonian’s Recovering Voices initiative helps reconnect individuals and communities with their linguistic traditions and sustain endangered languages for generations to come.